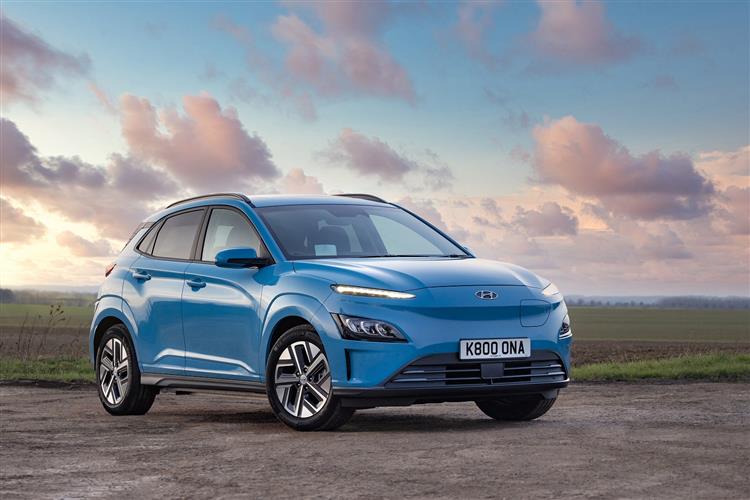 No manufacturer is more invested in the whole concept of clean automotive mobility than Hyundai. The brand has eco-petrol, hybrid, plug-in hybrid and even hydrogen fuel cell options in its current range. And of course, some full-electric battery-powered models. Here's perhaps the most appealing of them, the Kona Electric, now usefully improved.

Prior to this Hyundai's arrival, the full-electric car market was pretty much divided into a couple of kinds of contender. There were relatively affordable ones, like the Nissan LEAF, developed steadily to the point where their lithium-ion batteries can offer up to around 180 miles on a good day. Or for around twice the money, buyers can graduate to the more sophisticated battery technology that luxury models use - cars like the Jaguar I-PACE, the Audi e-tron, the Mercedes EQC and various Teslas. With these, a driving range of around 300 miles or more is the norm. This Kona's chief selling point is that it can potentially offer the kind of range you'd get in a luxury EV for the kind of price you'd pay for a more affordable one. As selling points go, that's a pretty strong one, though unfortunately for Hyundai, it isn't an exclusive attribute. All the same engineering that features in this car can also be found for a similar price in its cousins, the Kia e-Niro and the Kia Soul EV. This Kona EV then, needed a little more than advanced battery tech to set itself apart - which may have been delivered with the more eye-catching styling of this improved version. Let's put this car to the test.

There are no significant dynamic changes here; there didn't really need to be. The way this car hurls itself away from rest is pretty surprising the first time you experience it. Once you understand the drive dynamics here though, the rush of blood to the head that this Hyundai gets every time you press the loud pedal with any real vigour is only to be expected. There's a lot more pulling power than would be generated by an equivalent combustion engine - 395Nm of torque - and all of it's delivered to you right from the get-go, rather than building, as it would do with a fossil-fuelled powerplant. 62mph from rest takes 9.7s in the entry-level 39kWh version, which has a reasonable WLTP-rated 189 mile driving range between charges. But most Kona Electric customers are going to want the 64kWh variant, which manages a WLTP-rated range of 300 miles. Conserving that driving range requires careful management of the energy regenerative process that kicks in when you come off the throttle. Like some other Evs, this one provides you with paddleshifters behind the steering wheel that allow you to either intensify or reduce the regenerative braking feel. Alternatively, you can automise things using a 'Smart Regenerative Braking System' that constantly calculates the optimum level of braking regeneration, based on the positioning of vehicle ahead. On the open road, this car struggles a little with weight (it's 300kgs heavier than a conventional Kona) but the even distribution of the battery pack across the floor plan helps with handling and a more advanced independent rear suspension set-up has allowed the engineers to deliver a decent quality of ride.

Visual changes here are relatively minor but combine to give a much sleeker appearance. There's a restyled version of the closed front grille (probably the original model's least successful visual feature). And restyled daytime running lights and there are smarter, sharper headlights with multifaceted reflector technology. Length has increased by 25mm. As before, it helps that the EV model in question here is a high-riding SUV, so the batteries can be packaged in more easily without affecting cabin space, spread across the floorplan for a low centre of gravity, as they would be in a Tesla. Inside, the main change is the adoption of a 10.25-inch digital instrument cluster. The centre-dash infotainment screen is also 10.25-inches in size. And there's Hyundai's latest Bluelink telematics system, plus the usual 'Apple CarPlay'/'Android Auto' smartphone-mirroring. Along with mapping functionality that integrates into range read-outs and helps you to locate nearby charging stations. As before, an aircraft-style silver-trimmed centre console incorporates the 'shift-by-wire' push-button controls for the single-speed auto gearbox. And additionally includes a useful extra storage area in its lower section. And in the rear? Well it's in this part of the car that you're likely to be most keenly reminded that you've bought an SUV based on a supermini-sized platform, rather than that of a family hatchback. The same applies to the capacity of the 332-litre boot.

What Hyundai's EV competitors were expecting with the original version of this model was a fairly straightforward proposition: an on the road price in the £30,000-£35,000 bracket, battery capacity around 40kWh and 180 miles of WLTP-rated driving range. And indeed, that's almost precisely what's delivered by the base 39.2kWh version of this Kona Electric, which is offered in two guises, 'SE Connect (which costs around £30,000)' and plusher 'Premium' (which costs around £31,500). What the market wasn't expecting was the version of this Kona Electric that that most original customers for this model chose, the 64kWh variant that almost all customers of this battery-powered model will want. With this top derivative, there's 279 miles of WLTP-rated range for around £35,000 (if you go for a 'Premium'-trimmed model) or around £37,500 (if you go for the top 'Ultimate' variant). All the prices we've just quoted you include subtraction of the £1,500 government grant provided towards purchase of full-EV vehicles. This improved model includes a range of extra camera safety features, including Blind-Spot Collision-Avoidance Assist and Rear Cross-Traffic Collision-Avoidance Assist. Another feature new to this model is Leading Vehicle Departure Alert (LVDA), which alerts the driver if they do not react fast enough when the vehicle ahead of them starts moving. Further new safety features include Safe Exit Warning (SEW) and Rear Seat Alert (RSA). SEW warns passengers intending to exit the vehicle if it is not yet safe to do so. RSA is a door-checker feature that recognises if the rear doors have been opened prior to departing.

As usual with an EV, you get plenty of cabin screen options to allow you to plan your route around your remaining available charge. Both models offer charging flexibility with standard 7 pin Type 2 CCS and 3 pin ICCB charging cables. When the battery is depleted, you'll be able to recharge your Kona Electric to 80% of capacity in just 75 minutes if you can find a 50kW DC CCS charging point. Or 47 minutes from a 100kW charger. Most of the time though, you'll be charging this Hyundai overnight using a 7.2kW wallbox that you'll have to pay a little extra to get installed in your garage. In the 64kWh model. You can revive the cells from empty in this way in around 6 hours (which would use around £9 of electricity at current rates). Of course, to maximise your driving range, you're going to need to make copious use of the various driving aids Hyundai provides. There's a power meter driving gauge to the left of the speedometer in the instrument binnacle and the idea here being to keep the needle in the 'Charge' band as often as possible. There's also a 'Driving Style' section in the trip computer screen that can display to the left of the instrument binnacle and award you percentage readings for 'Economical', 'Normal' and 'Dynamic' progress.

The looks of this Kona Electric are much improved in this revised form, but it's appeal remains much as before. Strengths include the kind of relatively usable driving range that would make it almost usable as an only car. Better still, we've found here that the claimed range isn't so far away from what's actually achievable in everyday use. In a Peugeot e-2008, you'd get a classier interior. In a Nissan LEAF, you'd get more rear seat passenger space. But both those cars are completely trounced by the driving range this Kona Electric can offer in its higher output form. Which is something that only this car's Kia cousins can match for the price. This Kona though, has wider appeal. Enough to take it mainstream? Probably not. It won't be on sale in large enough numbers for a start. But it's a clear signpost to an all-electric future. And that makes it a very important car indeed.